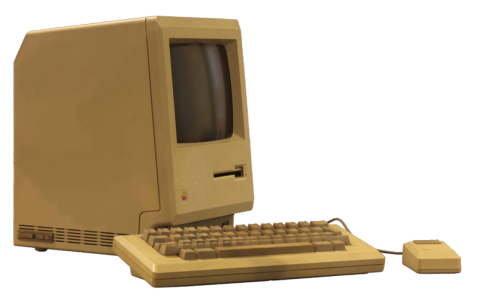 Apple is running a little retrospective on their site today as it is the 30-year anniversary of the release of the first Macintosh.  That so much of my life has been driven and changed by computers and technology–it’s kind of scary to think about it now.  I think of (honestly) all the things I’ve been able to create on a Mac that may not have been generated in the first place.

My first Mac was a Macintosh 512k.  It was released in 1984 and shipped with System Software 4, though this could be improved with the 20 Mb hard drive that was an optional “accessory”.  My parents purchased one used as a deal when I was 5, so that must’ve been 1988-89.  After coming from a TRS-80 with a yellow-tint monochrome display, the Mac was a treat.  It had a one-button mouse with a satisfying click.  It allowed us to plug in an external Hayes 1200 bps modem and connect to the rest of the world.  The 20 Mb HDD was a large as the base of the Mac and fit underneath it as a pedestal. END_OF_DOCUMENT_TOKEN_TO_BE_REPLACED