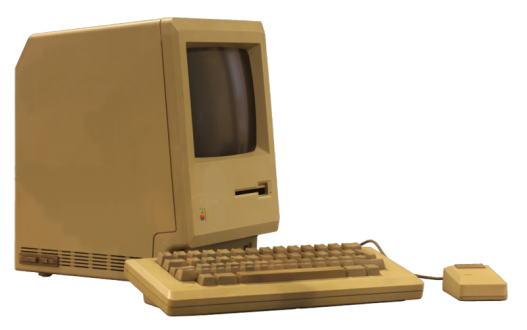 Apple is running a little retrospective on their site today as it is the 30-year anniversary of the release of the first Macintosh.  That so much of my life has been driven and changed by computers and technology–it’s kind of scary to think about it now.  I think of (honestly) all the things I’ve been able to create on a Mac that may not have been generated in the first place.

My first Mac was a Macintosh 512k.  It was released in 1984 and shipped with System Software 4, though this could be improved with the 20 Mb hard drive that was an optional “accessory”.  My parents purchased one used as a deal when I was 5, so that must’ve been 1988-89.  After coming from a TRS-80 with a yellow-tint monochrome display, the Mac was a treat.  It had a one-button mouse with a satisfying click.  It allowed us to plug in an external Hayes 1200 bps modem and connect to the rest of the world.  The 20 Mb HDD was a large as the base of the Mac and fit underneath it as a pedestal.

I remember the first time working in MacPaint and creating gradients and patterns– all types of things. Writing your name on the screen with the mouse! These were all types of input that I hadn’t used before.

The software library was fairly vast.  Microsoft Word and Excel came with our purchase, though I think that was due to the original owner rather than some sort of package from Apple.  My father and I made visits to “The Shareware Store” a small store in Bellevue Square (Bellevue, WA) that sold nothing but $1-$5 floppy discs loaded with shareware applications.  Many of these were games, but there was a lot of versatility and creativity there.

Its strange, but I don’t remember doing any development work on this Mac.  My TRS-80 had a BASIC interpreter and I worked with that a lot.  I’m sure there was an AppleScript interpreter on the Mac, but I didn’t really come back to coding (at least at that level).  I think 2-3 years later the family computer changed to a PC, a Compaq Intel 486-DX2 with a Win3.1 shell replacement called TabWorks.   Around that time my own personal machine changed to an IBM 386 PS/2, which got me back to a shell prompt.  Here I began coding again in BASIC and simple scripts like batch files and the like.

Back at school though, the reign of Macs continued.  I’ve used an embarrassingly large amount of Macs from this list: Wikipedia Timeline of Macintosh Desktops.   Perhaps as a pedantic exercise later I’ll go back and list them all out.  My point is that these devices have been an important part of computing in general, and not just any sort of Apple vs PC war.  These machines made the reality of a home computer tolerable, and eventually brought price down to where it was attainable for many people.

Its one of the main reasons I still use a Mac today– this is being written on a 2013 27″ iMac, and my main portable is a 2010 17″ MacBook Pro.  These tools have become an indispensable part of my life, and I’d wager that I’m not the only one.