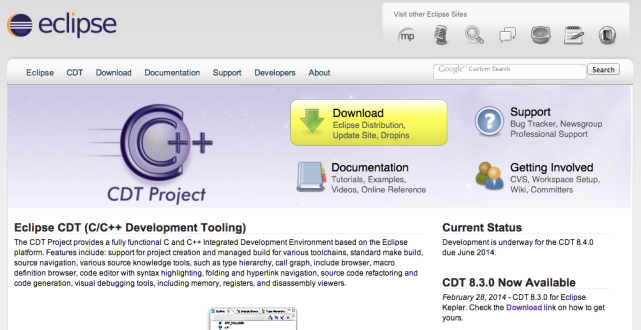 Adding in C/C++ support into Eclipse is as easy as hitting up the Marketplace within Eclipse and searching for “CDT” or C Developer Tools.  After installing the required packages, reboot Eclipse and you’re good to go.

Except you’re not.  The current version of Mac OS X is 10.9 otherwise known as Mavericks.  Mavericks doesn’t come with a deployed version of gcc, GNU’s Compiler Collection (formerly known just as GNU C Compiler).  Mavericks instead leverages clang, a newer open-source compiler designed to act as a 1:1 replacement for gcc.  At some later date I’ll compile these apps with clang just to see if I can track a discernable difference, but for now its really no big deal.  Anyway, back to getting gcc installed.  On Mavericks, head to a command line and type in “xcode-select –install”.  You’ll be prompted with a dialog that Xcode needs to install the Command-line Developer Tools.  Voila! Once you have these, you’ll have gcc installed.

The last bit is to actually point the Eclipse toolchain towards the right directory, which can be done under the Preferences menu.

Next time I’ll delve into tweaking Eclipse for Git or SVN repositories.