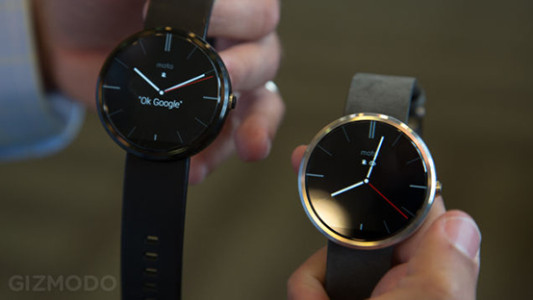 Tomorrow Apple is expected to announce after months (or years) of speculation some type of watch device or wearable at a press event.  Wearables are front page news today; device makers are tripping and falling all over themselves to release and announce their product before Apple gets their big reveal tomorrow morning.  Moto 360, Motorola’s (can’t tell if its an initiative or a brand yet) thing around their wearable device concepts is in full “blast you with marketing mode”.  Mashable has a review of LG’s latest watch entry up here.  I own two watches that I wear very rarely, and even then only as an accessory to a more business-oriented look– Typically a suit.  However, my money (and excitement) is on Apple’s iWatch for some key reasons.

I know a couple who got each other FitBit’s for the Christmas holiday and both wear them every single day.  The idea of a device that provides a “game-ification” or some sort of challenge for the user to do something is probably more successful than the device that doesn’t.  I liberally use the MyFitnessPal and Nike+ Running apps to provide an incentive and feedback on my runs, activity and diet.  My sister wears a wristband made by Jawbone called the UP.  Aside from it being a little loose, she says it’a great thing.  It provides heart rate and acts as a pedometer throughout her day.

For me, the most basic actions are already taken care of by my iPhone 5S– the M7 motion co-processor in my phone uses crazy low power, and I almost always have my phone in my pocket.  When I run, I wear an armband so I can listen to music and a combination of GPS and pedometer data ensures a high level of accuracy with my runs.  There is no doubt in my mind that among the active or fitness conscious, getting reliable feedback is a wonderful thing.

…But it needs to be multi-purpose

One of the few attributes I’d like while I run would be some heart rate and pulse data.  A few years ago while training for the Seattle Marathon some folks were using blocky pucks they strapped to their chests which communicated via Bluetooth back to dedicated running watches or a smartphone app.  There’s no question this stuff is big business, but I always felt better off because again: The thing tracking my data was already in my pocket, and that made it brain dead simple to manage, to not forget, and to adjust my “bad” behaviors.  An iWatch might purport to do all of those things.  Communicating over Bluetooth 4.0+ LE spec back to your phone, it may be packed with more sensors than display and power guts.  And because it may offer additional features we haven’t thought of yet, I think it could be rather ubiquitous.

In my mind, Apple devices are some of the more battery-conscious items out there.  Anyone familiar with the latest versions of Mac OS X have seen the “Energy Use” tabs in Activity Monitor, and similar datapoints in iOS7.  This is a complete cultural shift away from apps running as quick as possible to apps that also run as efficiently as possible.  I love when I can get my MBP to last all day long, but that won’t happen if I’m running some stupid intensive process (or working in an IDE for that matter).  We’re all trained to charge our phones at night, but it would definitely suck if we needed to charge an iWatch each and every night.  I’m hoping this device gets very efficient storage and use technologies–I’d hate to see it die on the vine.

The things under the hood with regards to HealthKit in iOS8 are really nifty.  I don’t want to violate the terms of my NDA, but there are huge, diverse datapoints available to be used with any number of devices and apps.  It’s a strong foundation with the idea that your data is yours and you can take it and extrapolate whatever you’d need to.  I think that’s very empowering from a fitness standpoint and could help turn some of the issues plaguing Americans into things of the past eventually.

I’m looking forward to tomorrow’s announcement.  I’ve got no disposable income currently, but perhaps an iWatch is in my future.

Well, that didn’t last long– I missed a day, but we’re getting back on the boat here.  Came across this article on Slashdot about how the ridiculously old TI-84 is still the calculator of choice in many classrooms today.  Texas Instruments apparently released an update in 2004, but back when I was in high school I used a Ti-85 with it’s high-end monchrome screen.

Having gone through Calculus and now Discrete Math, I can’t imagine doing any of it without a calculator– hats off to you folks that did not have this technology at your disposal when completing these classes. Yeesh…  I use TI’s latest variant, the Nspire CX CAS— and yes, I know that is a completely stupid name.  It’s got a nice color screen, USB out, and most importantly has an OS that runs in an emulator I use liberally on my Mac.  Being able to have some flexibility when doing homework is key, and I love that I can dump the files back out the calculator when I’m finished with the assignment.

The article points out there are languages like R around, and of course using something like Wolfram Alpha or the desktop version of Mathematica would be a suitable course of action too.  Can I admit something though? I find Alpha ridiculously difficult sometimes to get things out of, even when following their crazy formatting standards.  Mathematica is available to me as a UW student via their site license, and while I’ve downloaded it– it became too much to learn to solve (at the time) what should have been a very simple problem.

Hats off to the TI-84 for lasting this long– when they figure out how to prevent cheating with newer devices I’m sure schools will move to a new device.

Due to a breach in someone’s cloud service authentication photographs of several nude celebrities are making their way around the Internet.  There used to be a time when I could say they were making their way around a “dark corner” of the Internet, but it seems the net of the present (and maybe the future) is for everyone and a lack of privacy for anyone. I think the phrase “celebrity hacking” will continue to be a prevalent headline in the coming years, but I wonder what happens when it starts to affect the little guy.

I can’t tell whether this is a sensationalist headline or not: Everything we know about the the”Celeb Nude” and Trading Ring.  Or this one, at CNN.  I don’t know if anyone is really concentrating on the real story, which is that there was a failure to keep privileged information secret.  I think of the things I store (encrypted and unencrypted) around the web in public and private clouds, and I would be very shocked to have my private data come out.  I don’t have anything nearing what these people had, private photos, etc. but I think would be rocked just the same.  I’m supposed to be part of the body responsible for helping to keep your information safe, to make you trust us as developers when we say “Hey, I’ve got it under control. Your stuff is secure.”  Instead, I see no articles on the ACM or IEEE privacy group pages.  You might say that this breach happened over a holiday weekend, but I’d still expect some type of response from the provider in question.

The whole thing just kinda bums me out.  I’m going to keep working my way through this course on Obj-C and put my energy to good use.

Trying something new this month– I’m going to try and write a post a day which should be challenging to say the least. I’ve let GA sit dormant for too long, and I’m doing some fun things that deserve to be noted about (if only for my reference).  First off, I’m buried in Objective-C again for the first time in a good long while.  iOS8 is about to be dropped shortly (few weeks) and I think the last time I built a functioning app for iOS was back on version 3; At that point they were still dubbing it an “SDK”.

I’ve been following an e-book that these guys put out, iOS Programming: The Big Nerd Ranch Guide which is rather neat I think.  It’s covering a lot of things about iOS7 that I never knew and is really making it easy to forget about all the crap I learned for dev on iOS3– manual reference counting, myriad hidden API’s and the like.  I’m having a blast doing it.

Anyhow, back to it!