Well, another quarter is behind me.  I have like 2 weeks to try and decompress and get ready for the new quarter. I’m not sure if anyone truly decompresses from this stuff though– I think part of me is afraid to let it all go because its definitely the meaty stuff that shows up in a technical interview.  As a way of “relieving the pressure” so to speak, I’m going to try and improve my standing on GitHub today.  As CS undergrads we constantly hear that we should be contributing to open source projects, and to show off your GitHub profile when talking with prospective employers.  So today I’m going to try just that.

The irony is that there are a ton of articles online about “How to get started with open source” and they mostly involve working with a project you’re already using or are interested in.  Unfortunately for better or worse, most of my college career hasn’t been spent using third party libraries or consuming other people’s code, at least not on the surface. I am well aware that right underneath the surface of my OS there is a world of open source libraries and functionality.  My intent is to write about what I come across as I attempt to do something simple like “contribute to open source”.

The basics: Here is my GitHub profile page:

Those squares should be green….

It’s beautiful isn’t it? I’ve got a streak of pushing code to a repo of 1 single day. Ha!  Let’s change that.  GitHub suggests you search or explore the site by specifying a language.  I’ve spent the last 2 years in Java and I’d rather not be thrown a curve-ball today.  Looks like Square has a project called Ok-HTTP which handles HTTP requests via SPDY.  SPDY‘s goal is apparently to reduce web page load time and optimization over the HTTP interface.  Ok, sounds simple enough.  Who doesn’t want to make web connections faster?

I think my peers would say my “git-fu”, i.e. the amount of skill I have using Git is probably fairly high.  I can definitely grok the command line stuff, but I prefer to use the implementations within Eclipse or even Atlassian’s excellent SourceTree application.  I can either grab this thing as a pre-packaged Java JAR (compiled obviously) or I can grab the source through something called Maven.  Hmm…Looks like thats the first place I need to go. 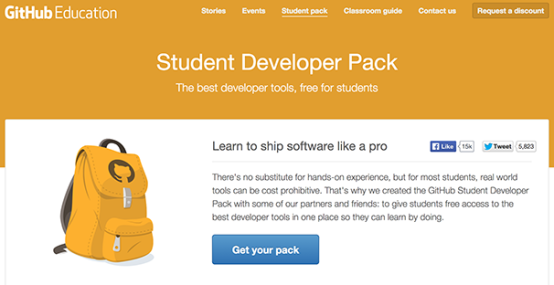 Normally my favorite site for repos is BitBucket vs GitHub but this week they announced something really nifty that seems very useful for students, or anyone really working with tools to ease software development.  It’s called the GitHub Education Pack, and it can be found here.  Once you verify your student account, they give you a lot of free or reduced fee access to a variety of services.  Some of these are completely useless to me (right now anyway), but a few standouts that I’m already using:

The other bits of the tools I’m not really using at this point but that’s because I have my own VPS and infrastructure located elsewhere.  For folks that don’t, the rest of these tools would be an excellent starting place.